This blog post was originally written by FarmBot contributor Tim Evers, whom the project sent to attend the FAB10 Conference in Barcelona to learn, network, and share our work here at the FarmBot Project.

This weekend I was at the FabFest in Barcelona, a festival for all things to do with digital fabrication and the maker movements. What initially surprised me the most about the whole Fab Festival was the mix of people attending. There were a lot of children, men and women of all ages and races. It makes abundantly clear that the maker movement isn't just some hobby for nerds, but is clearly for everybody.

The fun and artistic 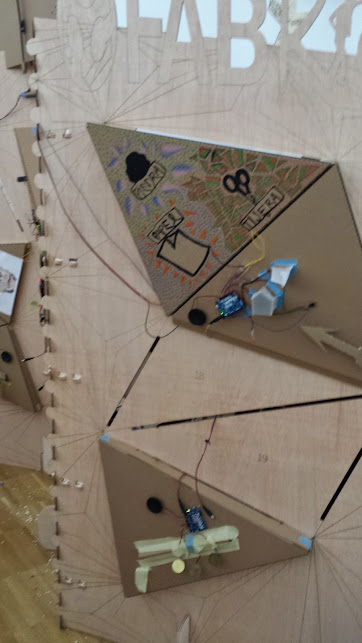 A part of the stuff present you could classify as having fun with technology. There were the little robots, turning smartphones into flying drones, making cardboard piano’s and making wooden figures with laser cutters… A lot of neat projects done by young and old participants. The tools these days to make this happen are pretty neat. There are also the more artistically inclined, making things out of wood, stone and plastic. Let’s say there were arduino’s, laser cutters and 3D printers as far as the eye could see. There was also a healthy presence of clothes and accessories. There were conducting fabrics and workshop on how to use them, workshops on how to make electronic jewelry, demonstrations on wearable electronics, scarves and bags with lighted patterns that kept changing colors. Of course there were the foodies, printing dough, chocolate, honey and whatever they could get away with.

But sometimes it gets downright creepy. When waiting at the entrance, I see a guy walking in with a hand in his backpack. That was weird. Turns out the guy is using 3D printers to make cheap prosthetic hands. This got really weird when a couple and their baby were walking by his booth. Turns out the baby had a deformed hand. So, the baby was fitted with a new hand printed on the spot. The baby didn’t really understand it all, but the parent were really happy. There was also a booth showcasing a multi material printer, that could also print silicon which they used to print an ear. Yes, a human ear. Now, that’s something that sends chills through my spine when I touched that thing. Also there were people making new legs. Well, let’s say it got creepy when being confronted with all the DIY body parts. So, to top it all there was a booth with an electronic internet controlled wiggling tentacle, moving like the real thing. Although if this thing works well and is cheap enough you could expect it to weed your garden in the near future as part of FarmBot.

I’ve seen a lot of stuff online, and even sponsored some of them through crowdfunding, so for me it was awesome to just see the stuff and speak with the persons behind the articles. What was also completely new (for me) was BioHacking. It appears that some biologists and chemists got pretty jealous on all those people playing with electronics, so they decided to join them. Using old equipment from laboratories, they now have very cheap bioreactors and literally growing their own ink and plastics. Quite impressive. It was also clear we’re not the only one trying to combine electronics and plants. There were multiple booths/workshops involving plants, including small aquaponics, soil sensors and communal gardens with low tech solutions.

A big part was of course the Global Fab Awards, of which FarmBot was a finalist. The winners was the W.Afate 3D printer, a printer made in Africa out of e-waste, using the chassis of an old PC and using a computer build into a jerry-can to control it. These guys were totally shocked when it was announced they were the winner and stood there with tears in their eyes to take their price under a very loud applause from the audience.

There were A LOT more projects than I described here. It often seemed that every time I walked by the booths, some other projects had arrived. It makes it hard to keep a track of everything. A lot of the talks that were held do say that digital fabrication and distributed manufacturing is growing. Makers are becoming a large part of the future. The maker fairs are also growing exponentially everywhere in the world, as are fab-labs and fab-cafés. It’s almost gone mainstream. But under that all, there was the feeling of hope. A lot of the people were there because they want to make a small difference in the world. There is the feeling that there is hope for the future, and that we can have fun making it!!

There was a panel and talk about farming. The people’s choice award was for a farming system, FabPonics. People have multiple opinions and approaches for food production with the maker movement, going from low to high tech, but food production is definitely on the agenda. FarmBot itself is on the high tech side of the scale of course.
Filed in: Community, Events, Open-Source
Previous article Inspiring Design with Rashan Senanayake Podcast: Agriculture & Farming in the 21st Century with Rory Aronson